Following an earlier posting on Martin Scorsese, a review of Hugo in 3D has now been posted on the itpworld website. In a nutshell, I think that the use of 3D is everything that might be expected from Scorsese but the film narrative is perhaps rather less than we might have hoped.

The box office returns so far suggest that the mass audience has not been attracted to the film so we can’t really tell whether the 3D is proving a draw. In the UK, a 3D film in the multiplex sees £2-3 being added to the usual ticket price which means a significant hike in the cost of taking the family to the pictures. Hugo, like many other 3D films, is also being shown in 2D on many screens.

As of last weekend, Hugo had just reached $50 million in North America after 6 weeks and is now falling down the chart. In the UK the Christmas fortnight figures aren’t released in full until Thursday but Hugo has already shown signs of faltering – by Week 2 its screen average had already dropped below $2,000, a sure sign of weak box office. The children’s film in the UK during December has been Arthur Christmas by a considerable margin over the rest of the field.

High critical praise in the US may help Hugo into the Oscar race and eventually the film might find the audience it deserves but at the moment it would seem that 3D isn’t quite the winner it has been proclaimed to be.

Back online – with Scorsese

Posted on December 5, 2011 by Roy Stafford | Leave a comment 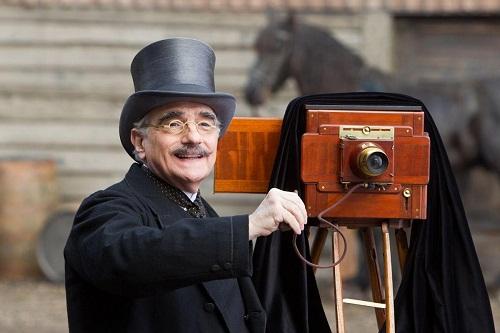 We’re sorry that this blog has been quiet for most of 2011, especially given the momentous events in the media environment here in the UK and worldwide. Murdoch’s bloody nose, with the closing of the News of the World and the hounding of tabloid phone hackers, and the potential for more open media following the ‘Arab Spring’ are just two of the stories we would like to have covered.

But now we are back and we’ll try to keep the blog alive. First off we want to focus on how a well-known Hollywood name allows a possible different perspective on two current issues.

Martin Scorsese is arguably the most revered Hollywood film director, feted by cinephiles but also known to more mainstream cinemagoers and even an Oscar-winner for The Departed in 2007. That film was a ‘remake’ of stories from the Hong Kong trilogy of Infernal Affairs films and its Oscar and box office success seemed to give a legitimacy to the Hollywood practice of remaking foreign language films. We’ve covered this in MSB in relation to horror films like The Ring series and in MSB5 we noted the remake of Let the Right One In which emerged in 2010 as Let Me In. In many cases the remakes are quite serviceable but the debate goes on – why remake? Why not release the foreign language original properly? I’m not looking forward to David Fincher’s The Girl With the Dragon Tattoo remake due out in a few weeks. Fincher, like Scorsese, trades on his reputation as a ‘name’ filmmaker. But in this case the Swedish film (directed by Danish director Niels Arden Oplev) is already an American-style thriller and without Noomi Rapace as Lisbeth Salander, the Fincher version seems hard to justify.

But why link this to Martin Scorsese now? Simply because a report a couple of weeks ago announced that Scorsese is to adapt the work of the best-selling Norwegian writer Jo Nesbø. Nesbø is in some ways the heir to Stieg Larsson’s popularity with the Millennium Trilogy featuring Lisbeth Salander, although Nesbø’s Inspector Harry Hole has been around for several years in a succession of crime thrillers. Scorsese’s choice is The Snowman which was an international bestseller earlier this year. This isn’t a re-make since Nesbø has been very careful about allowing his work to be adapted – the first adaptation (not a Harry Hole story) was only released in Norway this year. And Nesbø loves Scorsese. He tells us that the poster for Taxi Driver was on his wall when he first began to write and that he doesn’t mind if Scorsese moves the setting of the film. In the midst of the international rush to put ‘Nordic Noir’ on screens in English (e.g. the US TV remake of the Danish series The Killing), Scorsese might well find acceptance with some fans (Nordic film companies are only to happy to co-operate).

The other Scorsese story is the opening of his film Hugo – a children’s film, a fantasy, a narrative about cinema? The film has already won an award from the National Board of Review in the US and it seems set to be an international hit. It is also the first film by a director of Scorsese’s standing to be made in 3D. Mark Kermode, perhaps the most popular film critic in the UK and famously extremely ‘anti’ towards 3D once said that he wouldn’t take it seriously unless Scorsese made a film in the format. Last Friday on his radio show on BBC Radio 5 Live Kermode grudgingly accepted that used by Scorsese, 3D could be interesting.

3D is now central to the release of ‘tentpole movies’ in mainstream cinema. In the UK, the biggest multiplex chain, Odeon, is now completely digital and able to offer 3D in many of its screens. But recently box office for 3D releases has been disappointing with audiences not willing to pay the extra cost for the 3D versions of films like Harry Potter. It will be interesting to see if Hugo will buck this trend. Scorsese fans will be interested to see how he presents the history of special effects in the cinema (which is an integral part of the plot of the film). But will this fascination with early cinema tricks attract the family audience? We’ll let you know. Also to come over Christmas is the latest Bollywood blockbuster, Don 2 starring Sharukh Khan and scheduled as a 3D release.