It’s taken a long time, but the ‘Korean Wave’ or hallyu has finally reached the UK with Psy’s ‘Gangnam Style’ and his ‘horse dance’ officially recognised as the No 1 single in the UK. The hallyu began in the late 1990s with the successful export of South Korean TV shows to China and other East Asian territories. High quality programming, cheaper than US product and more attuned to local cultural trends, the TV programmes were followed by the spread of K-pop, a regional competitor for Cantopop and Mandopop in the Three Chinas and J-pop. Korean films have also been part of the hallyu. 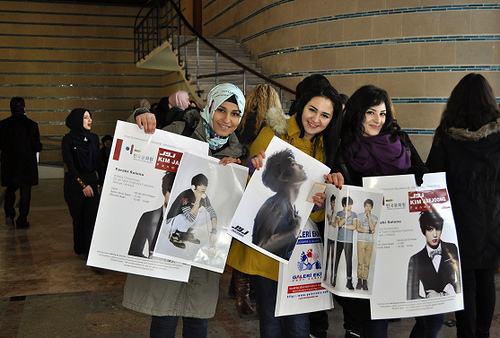 Fans of visiting K-pop star Kim Jae-joong of the band JYJ in Turkey where hallyu is popular. Photo from Korea.net and Korean Culture Service taken in February 2012.

According to the 2012 IFPI Report on Digital Music, South Korea has risen from being the 33rd placed national music market in 2005 to the  11th in 2011. More significantly perhaps, 70% of K-pop revenues in South Korea come from digital sales – well above the international average. The success of a K-pop act in the UK and US marks K-pop’s recognition in the other two major international markets – Japan is the second biggest market and the hallyu arrived there with TV drama serials in the late 1990s. But alongside recognition in major markets, K-pop is also finding its way into many of the world’s smallest markets where there is little industry as such. You can find its influence across Asia, Africa and Latin America.